The results are in from our 2022 Crop Tour! Thank you to all our area producers who partnered with us for this year’s tour. The Crop Tour allows us to provide accurate growing season updates and also preliminary preharvest yield checks. If you have any questions about these results or want to be a part of next year’s tour please contact your local grain originator or agronomy sales rep.

FROM THE GRAIN TEAM                                    – Steve Meisch, Grain Origination Manager
Looking through the data compiled during our crop tour I am a little surprised to see our estimates are above last year’s final yields. Walking through the fields and seeing the amount of tip back and stand issues that we encountered, I didn’t think the numbers would look like this. The potential was there to have a bumper crop for sure. The corn crop was under a lot of stress in the V10 to R4 stage, which is when it will decide if it will have tip back or not. From what I saw during the tour, I feel the corn crop in our trade territory will be better than last year. I encountered very little down corn due to root worm, even though we know they are still there. The plants themselves on average across all fields look healthy and are green from the braise roots to the tassels. Almost all the farmers that I talked with had sprayed fungicide this year. This will slow the crop from maturing, and with this year’s late planting dates we will see harvest starting around the first week in October. I feel that a producer looking at their corn crop and the current corn market can comfortably sell up to 60% of their APH before harvest.

FROM THE AGRONOMY TEAM                          – Jeff Keifer, Agronomy Sales
On August 29, Dave Kerber and I toured a slice of fields covering three different counties. Most of these areas received between two to three inches of rain, accompanied by gusty winds the day before, but all the corn fields that we toured were standing straight with no sign of snapping, goose necking or even leaning. Soil conditions were obviously on the wet side, however no standing water was observed in any of the nine fields we sampled. Most of the corn was in the dent stage, but a couple of the fields were still in the dough stage. One of the first things we noticed in all the fields was that population numbers were good. Without knowing the original planting population, it is hard to say for sure what percentage of the seed actually survived, but population was sufficient for high yields in all nine fields. Aside from having sufficient population, the corn plants were healthy looking in general. We came across very few diseased plants and no Tar Spot was observed. Several fields had late-season grasses and broadleaf weeds under the canopy, but nothing to be concerned with. Insect pressure was light, with the biggest problem being rootworm beetles. Stinkbugs, Japanese beetles and army worms were also observed. Stalk strength was good and the plants were mostly still green all the way to the base of the plants. As far as the ears go, there were some notable characteristics as well. The ears were averaging bigger numbers around than we normally see. The average ear was at 16.3 rows around for the area we toured. Ears did frequently exhibit tip back where kernels at the tip of the ear were either left unpollinated or were aborted sometime after pollination. Despite the tip back issue, yields were generally good, but variable. Our average yield was 214.3 for the area we toured. Our recorded yields ranged from 182.5 to 269, which is a range of 86.5 bushels with a standard deviation of about 30 bushels per acre. We wrapped up the tour for the day just as another rainstorm started to roll in. We don’t think this crop is going to break any records, but we left the field that day feeling optimistic about the corn crop in our territory. 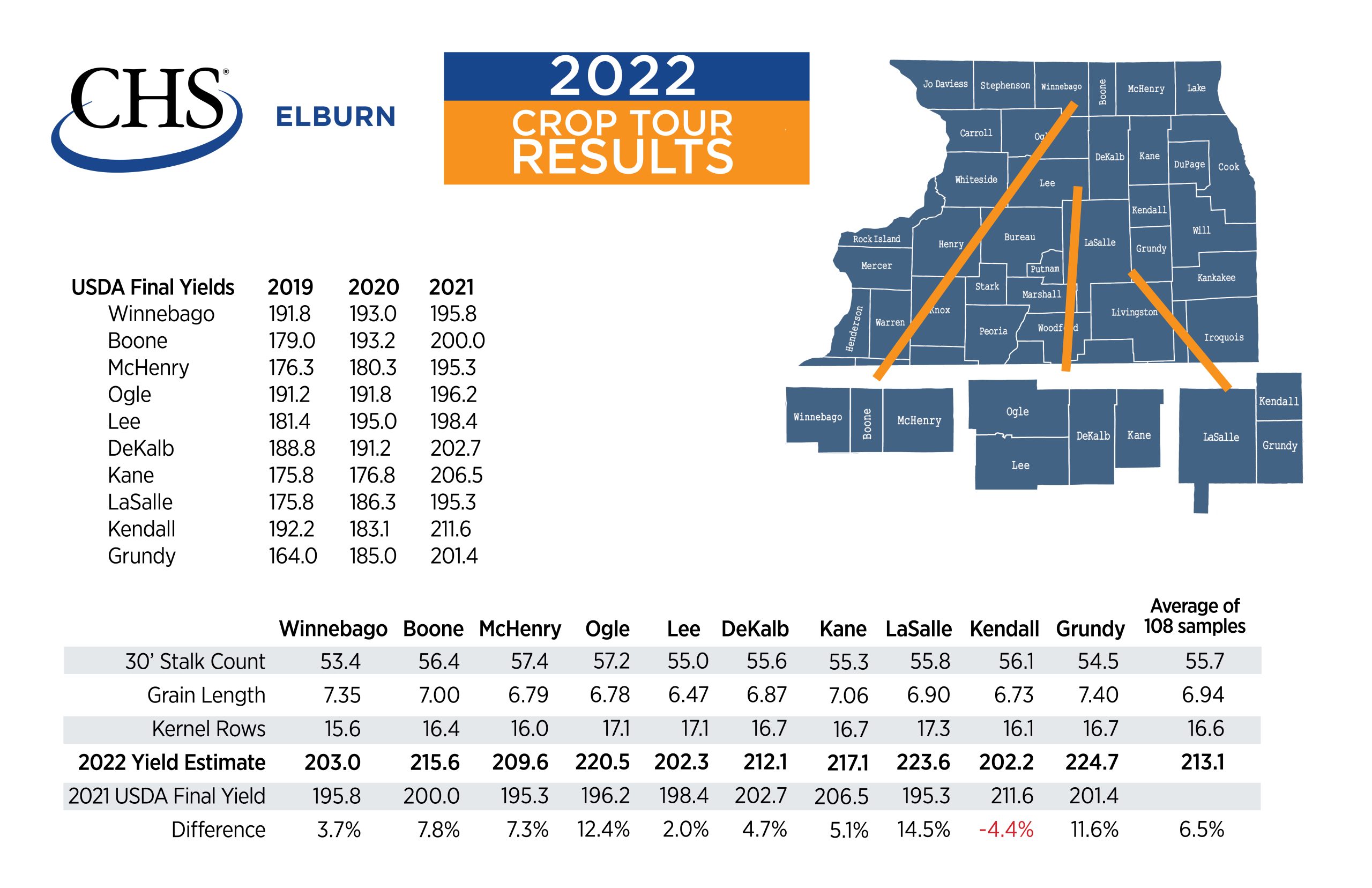